First off, I got the laptop for a fairly cheap price (given the specifications, which I shall be listing in a while) - INR 26,000 (or USD 433) to be precise. This laptop was imported by some eBay India seller who sent me a xerox of the original bill which showed that the laptop had been bought from Thailand for about 12,000 baht (INR 22,260 or USD 370). The fact that there wasn't any laptop with better hardware at that price point at the time of purchase and that months later, a friend bought the same model for about INR 7,000 extra makes me confident that I got the laptop at a great price.

As is the case with most laptops from Dell, same model numbers can have varying specifications. So, here is the stuff my Dell Inspiron 14 3421 has got inside it.

Note: Pardon me for the poor quality of the images I've used in this review -a main reason why I've let the words do more talking. (I don't have a handycam, or a professional camera, and obviously can't afford one, otherwise I'd have already bought one by now. So, please don't advise me to do that.) 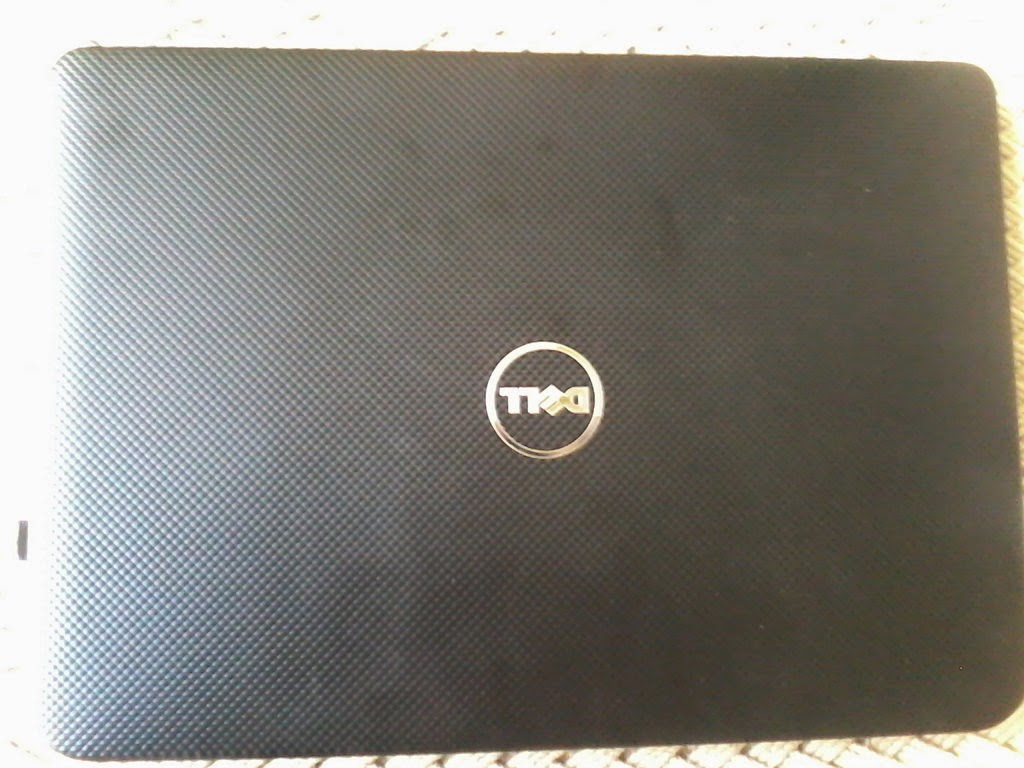 Though the design isn't the most elegant one you'll ever see, you can't call the laptop ugly at all. Carved out of plastic, the body of the laptop is diagonally checkered. It is prone to minor scratches  and won't catch finger prints and smudge marks, at least not as easily as the metal ones do. Thanks to the smaller screen size, Dell Inspiron 14 3421 is pretty light weight at about 1.9 kg (4.2 lbs).

The 14 inch display might seem a bit small, especially if you are accustomed to working on desktops/laptops with larger scrreens, but most of the times you won't miss a larger display. I'd go for the added portability that comes in with a 14 inch laptop instead of a 15.6 inch one every single time I'm presented an option to. Your choice will very depending on whether you want to not move your laptop that much (I have to make trips from hostel to my home every weekend) and whether you are a media junkie. Watching movies and playing games is obviously more fun on a bigger screen.

At 1366x768 pixels, the screen is picture quality is a tad bit crisper than 15.6 inch screens. The screen is quite reflective and this becomes more noticeable when running the laptop at the lowest brightness settings. Increasing the brightness a little makes sure that reflections don't ruin whatever it is that we are watching on our screen.

While you can't except your i3 processor to compete with heavyweights powered by i7 (and its equivalents) processor, the 3rd generation Intel i3 gets the job done. Coupled with 6 GB of RAM and the not-so-lame Intel HD 4000 Integrated Graphics, I have been able to multitask with ease. I'm a power user - shuffling between about 10 programs at a time, still lags and hangs aren't a routine problem.

I have played (and completed) games with high graphics requirements with ease (not with maxed out graphic settings inside those games though, that'd be expecting too much from Intel HD 4000). Games I've played include Far Cry 3, NFS Most Wanted 2012, NFS Hot Pursuit 2, Crysis 2, Crysis 3 and others. Though it took a while to start up, to my amusement, Dell Inspiron 14 3421 even ran COD Ghosts (with everything set at minimum in the graphic settings inside the game).

One thing I hated is that Intel i3 can't Turbo Boost to higher clock speeds and having a ULV processor stuck at 1.8 GHz seemes to be a bit too tight on paper. Thankfully though, even at 1.8 GHz, things sail smooth most of the times (when I'm not trying to run games as large as COD: Ghosts).

If you decide to buy an Inspiron 3421 and your laptop comes with 2 GB of RAM, I'd seriously recommend you to use your free slot available for RAM and chip in another 2/4 GB of RAM as it can otherwise act as a bottleneck in the performance department.

This is one of the very few sections I don't want to talk about this laptop. The audio output produced is too low. I've been in embarrassing situations where my friends ask me to turn the volume up a bit and I've to tell them that it's already maxed out. If you are a media junkie, you'd want to invest some bucks in a portable speaker for your laptop.

Nothing too exceptional about the keyboard. The keys are easy to press and don't make a lot of noise - but I've seen better keyboards (Lenovo's AccuType keyboards are cool). There's a small LED in the Caps Lock key to tell you whether it is on or off. In laptops with 4" screen, numeric keypad is generally missing - which is the case with Inspiron 3421 too. The keyboard on the right is the one I got after I got my Thai + English one replaced. I've explained the whole keyboard replacement thing later in this post itself.

The touchpad is really brilliant and honestly speaking, I din't expect it to come with all these gestures and stuff at this price point. You can pinch to zoom, use the corner to scroll, or use two fingers to scroll. All these gestures can be turned on or off using the Dell Touchpad application which gets installed when you install drivers for your touchpad. Without installing the touchpad drivers, multitouch gestures simply won't work, at least not on Windows. This was my first laptop and before buying it, I thought I won't be able to do without a mouse, but the easy-to-use touchpad made sure that wasn't the case.
Note: If your system comes pre-installed with Windows, chances are it will already have all the required drivers installed otherwise you have to manually download and install them from http://www.dell.co.in/support.

Honestly speaking, I expected the battery to last for longer durations, given that the processor is a ULV one. When the laptop was spanking new, the battery lasted for around 3 hours - under Power Saver mode. Now, the battery backup is like 2 hours and 15 minutes or so, under the same mode. When on battery and I know I won't be able to charge the laptop anytime soon, I don't switch to Performance mode and thus can't really say about how long the laptop lasts under that mode.


Heating problem or the lack of it

The laptop heats up quite a bit while playing heavy games, but the heating is still tolerable and is pretty low when I compare it with what my friends' laptops (there are tons of laptops in our hostel). As far as I've heard form them, a few Samsung and HP laptops suffer a lot from heating problem and require cooling pads. Thankfully enough, I haven't even thought about buying a cooling pad or any other similar solution. Simply putting, this laptop is free from over-heating problem - the credit behind which might be low clock speed of the 1.8 GHz i3 processor.

The power button is a bit difficult to press, though with time, you'll get used to it. All ports are working fine till now, no connectivity issues so far either. The only problem I had faced with the laptop is that about a month back, my screen started to flicker a bit when I rotated the monitor around the hinge. A quick Google search let me know that this might be because of the LCD cable getting damaged, which brings me to my next point.

When I called the Dell Customer Care number about the problem I was facing with the screen, they had me test a few things (like asking whether the problem existed when I was in BIOS). Though the phone call with them lasted a bit longer than I would've liked (about an hour), by the end of it, they assured me that they will send an engineer to my house to get the screen repaired. I had called them on Thursday evening. By Saturday morning, I received the parts that were needed to replace the faulty ones and by evening, a Dell engineer appeared on my doorstep and fixed the problem within the next half an hour. To summarize my whole experience, I'm amazed by the speed and quality of the service provided by Dell.

As I told before, I bought this laptop from Ebay India where the seller had imported it from Thailand. I don't know whether it was legally imported or not, but I have been able to avail warranty on it, so I'm pretty confident about grabbing such deals in the future as well. The only visible thing that differentiated my laptop from those bought in India was that the keyboard on my laptop had some weird looking Thai alphabets. Whoever saw my keyboard asked annoying questions like, "Which language is that? How to type in that language? Is your laptop Chinese?" I shall get to the how I get rid of that annoyance part in a while.

In order to avail warranty on your laptop, you will need to transfer the ownership of the laptop to yourself. You can do that by filling the details of the original buyer followed by filling your own information in this form. Once you do that, you can call the Dell guys and tell them your problem. They will get your problem solved pretty fast.

Coming back to how I solved the annoyance (weird Thai characters on the keyboard and people asking questions about it), I installed KeyTweak, disabled the Home key and told the Dell guys that my Home key has stopped working. Though I felt bad for telling them a lie, the shining new English only keyboard more than made up for what I was feeling.

A decent combination of 3rd generation Intel i3 processor and Intel HD 4000 graphics along with exceptional support from Dell makes this laptop the best one you can get at this price range. The only thing that might be a deal breaker for some will be the 14 inch screen, which is slightly smaller than the 15.6 inch screen we see on most laptops.