Review: Solid Explorer finally out of beta, the best File Manager on Android!

Solid Explorer is one of the best rated apps on the Play Store. Developed by Krzysztof Głodowski, Solid Explorer is the best File Manager I have ever used on my Android mobile. The app was in its beta stage since a long time, and just yesterday, it received an update which gets it out of beta. Today, I am going to do a detailed review of the app.
Note: This is not a paid review. I was forced to do this review by the awesomeness of the app.

Initial Startup Screen:
As they say, first impression is the last impression. The first launch of the app brings you a nice little visual guide which makes you familiar with the features of the app. Hmmm, nice idea!
User Interface:
The user interface is quite nice, it actually looks beautiful and takes some time to get used to, as the app's design is somewhat different from Android's conventional design. Almost every function that is frequently used is a tap, or a t most 2 taps away. The app looks elegant and soothes the eyes. Long tapping on any file/folder brings out many general options like Cut, Copy etc. and some others which you don't find everywhere like Archive and properties. You will say Properties option is available in all file managers, but I don't agree. Why? The amount of detail presented to you about any file is really detailed, supported by some nice visuals. See the snapshots for yourself.

Dual Panes:
If you try out a lot of apps, then you might have seen this feature in Dual FIle Manager, but it is more deeply integrated into this app. As the name suggests, there are two panes available which makes copying and moving stuffs manifolds easier. Long pressing a file/folder presents options like "Copy to"/"Move to" which copies/moves the stuff into the folder open in the other pane. The second pane can be accessed  with a swipe to the right (or left, depending on which pane you currently are on) if you are in portrait mode. As soon as you rotate your device, both panes are visible at the same time. (Check out the screenshots.) Add to this the drag and drop feature, which lets you drag anything by long pressing its icon and dropping it to any folder in the same pane or the other pane.


Built-in File viewers:
The app has built in text and image viewers. The text editor is really handy when you want to tweak some root files, like build.prop, on the other hand, the Image editor  loads images snappily, faster than the default Android Gallery on my sluggish low budget device.
Root Stuff:
Don't know why, but root browsing wasn't working in the recently updated version 1.4.0, maybe its because the version of busybox that comes included in the new version doesn't support my device. I expect this to be fixed in the next version as I have dropped the dev a quick little mail over this bug. Based on my experience from previous versions, it was fun to handle root files with this file manager. Root Explorer seems boring now! An option to manage File Permissions is also present, which is the first thing I look out for whenever I test any file manager which claims to support root files.

Indexed Searching:
Come on, you must heard of this feature if you use a Windows 7/8 PC, haven't you. This technology keeps an index of all the files which can be searched way faster than conventional file search methods. And given the fact that I do search a lot of files, this one is my favorite feature.

Archives:
Solid Explorer comes with built in support for compressed file formats such as zip, rar and tar. When we long press a compressed file, the option to extract it opens. As expected, there are two options: first one lets you extract the file to the same folder in which you are currently present, the second one creates a new folder and extracts the file there. When you want to archive a file, you can do that in either zip or tar. If you select zip, you can even encrypt the files using a password.
Operations:
Long operations like copying huge files or zipping large folders can be minimised and later on viewed from menu > operations. The operations menu lists the currently ongoing operations, and the history of completed/failed operations. One thing I would like to mention here is that we can even pause ongoing processes, an option missing from almost every file explorer on Android (and from windows explorer too!).

FTP, SFTP, SMB and Cloud Support:
Solid Explorer manages FTP, SFTP and SMB connections decently. I was more leant towards checking out the dropbox integration and it was spot on. Clicking on the "New" button at the left bottom of the screen allows us to join any of the above said network. As of now, Cloud services supported are Google Drive, Skydrive, Dropbox and Box.The dev promises to add more options soon. Selecting dropbox from there opens up the browser and you are  supposed to provide permissions to Solid Explorer by logging into Dropbox. Once you are logged in, the files and folders appear just as if they are present offline. 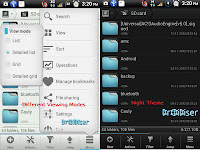 The folders view can be changed to Grid, List, detailed list and detailed grid view. Also present is the option to change the overall theme of the app which can be changed from light to dark. The settings screen in the app lets us customise many small details which may otherwise irk you, like low quality of thumbnails.

Support:
Solid Explorer has a quite active support thread running over xda, and as I saw on the thread, most of the queries by users are responded to by the dev himself. In my review on Play Store, I asked if the app could be a bit lighter, and there you go: The app's size came from over 4.5 MB to 3.6 MB. Am I impressed?

User Reviews on Play Store:
The free version of this app has been downloaded more than 500,000 times and has received highly positive feedback with a rating of 4.8 stars out of 5 from the 15,339 ratings that have been casted till now. I have seen only one app with comparably high ratings: Titanium Backup, which itself is the best in-class application for Android.

Download:
The app is available as a free 14 day trial with all the features. If you want to continue enjoying the app, you have to pay two bucks for the unlocker, which I think, is justified for the quality of the app.

Conclusion: ☆☆☆☆☆
Unlike other file managers with root support (like Root Manager), Solid Explorer is as much handy for non-rooted users as for rooted ones. Add to that the elegance and ease of use of Solid Explorer and we have a winner here. I can't even give the developer a suggestion for any new feature, I can't think of anything more! Solid Explorer is the best File Explorer I have got my hands on. I wish that I had a PC version too!
Loved our tip/guide? Get more of them in your Inbox!
Follow us on: