TWRP vs Clockworkmod: Which custom recovery is the best?

Home » android » clockworkmod » debate » exclusive » TWRP 25/04/2013 10:06 pm
A recovery is an important partition in an Android device, which allows people to recover (as the name suggests) their phones/tablets from creepy situations. More often than not, the stock recoveries, i.e. the ones which come pre-installed on any device, suck at the purpose they are present for. This welcomes third party recoveries like Clockworkmod and TWRP to the scene.

Clockworkmod recovery has been around for a while, and is unarguably the most popular stock recovery replacement. Clockworkmod recovery is created by Koushik Dutta, a well known Android developer, recognized for the popular ROM Manager app. Clockworkmod recovery comes in two versions- Touch CWM or Non-touch CWM. A large majority of the devices are stuck on the non-touch version, fiddling around with their volume keys to scroll up and down the long lists of items.

TWRP recovery, on the other hand, is relatively newer and brings in a modern interface, adds a few options and customizations here and there, which are indeed quite handy. Created by Team Win, TWRP is an abbreviation for Team Win Recovery Project.

Learn about each individual feature of clockworkmod recovery in detail.

The Interface:
I think everyone might agree on this, clockworkmod isn’t the best looking recovery out there. Even the touch version of the cwm recovery doesn’t feel as good as TWRP recovery. TWRP recovery has nice big buttons, and a pure touch interface adds to the fun.

TWRP also has an option to turn the display off after a specified amount of time. Confirming things and unlocking the screen requires you to perform a swipe gesture. On the other hand, while there is no such thing as screen lock, confirming things require you to swim across waves of “No” to find and select the “Yes” option. 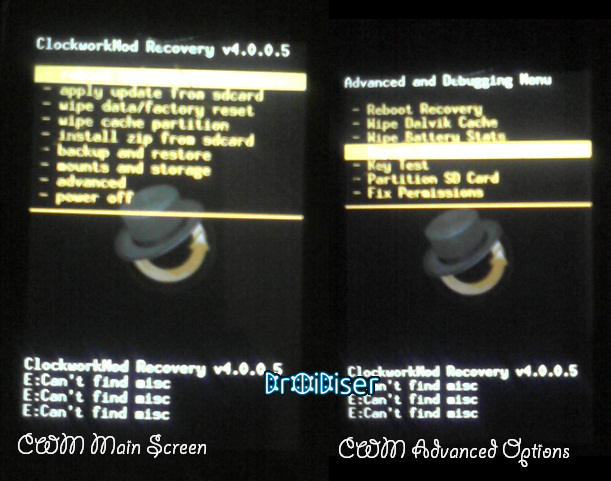 Installing ZIPs:
Installing ZIP files is one of the most used features in a recovery, thus, as expected, both the recoveries are equally good at installing zip files. The ease with which you can locate the zip file you want to install is comparatively better in TWRP, thanks to its in-built file manager, we shall discuss about it later.  A zip file isn’t specific to any recovery, still, any file that is flashable via clockworkmod should (theoretically) work without any glitch on TWRP, and vice versa.

Backing Up and Restoring backups:
While selecting the backup option in clockworkmod directly starts the backing up procedure, doing the same thing in TWRP presents you with some nice options, allowing you to control which partition you want to backup, in which storage you want the backup to be and also, if you want compression to be enabled or not.. These options are really useful when you want to backup only one partition, say system, to test some dev kinda stuff.

Coming to restoring backups we have taken, there is an advanced restore option available in clockworkmod recovery, allowing you to restore only one partition of your choice. Again, this could have been made better by allowing to select/unselect as many partitions as you want, to restore. TWRP recovery bests clockworkmod recovery in this section, by giving exactly what I asked for in the previous point.

Another nifty feature available in TWRP recovery is the option to rename the backups. Though this can be done with clockworkmod recovery backups too, this option isn’t present in the recovery itself. We have to manually do that using a file explorer, and need to take care while doing that too. (If you aren’t careful, you might end up with md5 mismatch errors while restoring the renamed backups.)

One thing I liked about the newer versions of the clockworkmod recovery is the blob file structure it uses to take backups. With blob structure, the first backup is of a large size, but the subsequent backups are considerably smaller in size.

Other not-so-often used options:
Clockworkmod recovery has some nice features like:
TWRP Recovery has the following ones:
I would like to comment on few of these options. Partitioning the SD card in clockworkmod is by default set to ext3 file system, with no option to change it. In TWRP, it can be changed to ext4.

File Manager option is really handy. Think of a situation when your phone doesn’t boot up due to a change you made in a system file. You simply undo that change by transferring that file to your pc, copy that file to your sd card and move it back to its original place. And Eureka! Your phone is up and running again. I seriously miss this option in clockworkmod recovery.

Conclusion: For me, TWRP wins over clockworkmod recovery, without any doubt.

Please note that most of the things I have discussed above regarding clockworkmod recovery are based on CWM v4.0.0.5, and a bit of knowledge about newer versions has come from trying out newer cwm versions on my friend’s mobile. TWRP recovery reviewed above is 2.4.4.0
Please let me know about anything new that cwm might have introduced but I have missed.
Loved our tip/guide? Get more of them in your Inbox!
Follow us on: