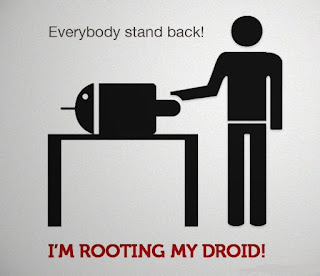 If you're having an Android OS powered device,then you surely must have heard of the term 'Rooting.' I'm here to explain this term and to remove all your confusions regarding this thing.
Read on the full post to get your mind clear on everything related to Rooting your android device.

Q. What the hell is Rooting ???
A. If you are familiar with the Windows operating system and its basic terms,then you must be aware what the 'Run as Administrator' option does.Its almost the same thing that rooting allows you to do in your Android.In layman language,it allows you to play around with the system files making you the true controller and administrator of the device you have shelled out so much money for.For example,changing the splash screen (the welcome screen that shows up whenever you switch on your phone,usually having the manufacturer's logo),or deleting some crap apps your mobile came loaded with,every such extraterrestrial thing requires you to have the adequate permissions to edit or replace system files.

Q. Why should I root my device ???
A. Obviously,before putting something,as expensive as your smartphone,on risk,you would like to know the pros and cons of this rooting stuff.Right?So,here are the pros:
You surely would have come across many apps on Google Play with the tag- Requires Root Access.Rooting your device will ensure you can run any and maybe all of those apps.Some apps are worth mentioning here.Market enabler will allow you to have all those apps available to the US only customers available to you on Google Play itself.Some anti-theft apps require root to wipe data,if you run out of luck and lose your phone somewhere in this damn big world.Just shake allows you to shake your phone to answer/end calls,flip the phone to silent it and also allows you to change the track currently playing on any of your music players on your phone.

With CPU clock speed changing apps like SetCPU,No Frills etc. you can run your CPU on low speeds to extract many a times the juice you normally get,this thing is very handy in some situations when you can't get to a charger.The phone will obviously run slow,sometimes hanging,but still you won't be playing Black Ops in such circumstances,eh?
Also,the popular battery saving app Juice defender also requires Root access to perform many actions.

With a free App called AdFree (there are many others on Play doing a similar job,this is the pick of the lot),You can block all those annoying ads which keep on popping whenever you're playing a free game(Angry Birds??).This app is successful in doing its job in more than 90% of the cases or I should rather say apps.

If your device came loaded with lots of bloatware,then this alone is a good reason for you to root your device.The apps not only take app your space but are also annoying.Some other apps that may fall in this category are the default applications you no longer use,like I prefer Go Launcher over the stock one,so I deleted the stock browser and converted Go launcher to system app and as default launcher
You can tweak your device to the fullest once you root it-be it the fonts,boot animation or the screen that shows up whenever you switch your device on-You can change everything to whatever you like.
While running some heavy apps,lagging is generally observed.This can be prevented by overclocking your device using SetCPU.
If you keep running out ofmemory,and find it hard to delete any of your favourite apps,then rooting might solve your problem.External SD card must be supported by your device for this.Use any app like Link2SD or A2SD to completely move any of your apps to the sd card.
Note:Link2SD doesn't allow moving your stystem apps to sd,while A2SD doesn't allow you to select individual apps to be moved to the SD card.
You can play almost any of those Nvidia tegra only games on your device using Chainfire 3D,available on Google Play.
This is a must if you're on a limited data plan.Many apps in the background keeps on eating your data without your permission.Use Droidwall to prevent any wastage of your data.
There are thousands of other things,literally,which I can't recall or haven't even heard of.It's a whole new world once you root your Android.

Q. Why should't I root my device???
A. The list won't be as long here.The main cons of rooting are:

This is the main reason behind many people staying away from this rooting stuff.However,unroot options + a system backup,most of the times solves even this problem If you ever need to take your device to that ugly service center.

It can damage your phone:

This is the most serious point.Many apps like those overclocking your CPU can harm your device over a period of time.So,if you want to have your device with you till tou die,you should never ever root it.
I don't think this point needs any explanation.

As you would have seen,the pros list is much bigger than the cons which is the major reason why I advise people to root their phone:It helps you to extract the maximum possible out of your device.

I will discuss the procedure of rooting your android device in the near future.
Update:As promised,I have written a full fledged how to guide for rooting every Android device.Read it here.
Please leave your suggestions or questions below in the comments section !!!
Loved our tip/guide? Get more of them in your Inbox!
Follow us on: